Life in a Senior Residence Community is challenging and cherished.

This was originally posted on the blog California Woman.

Salinas Train Depot, Salinas, California. Waiting for the Amtrak bus, I satisfied my early morning caffeine craving at nearby Olivia’s Cafe—here’s Olivia and  the morning crowd. I spoke Spanish with them, but the nice guy with the white shirt on the end wanted me to use his language, Italian, “Same thing” he said.

“Take It Easy” is the title of a song written by Jackson Browne and Glenn Frey, and most famously recorded by the Eagles (with Frey singing lead vocals). It was the band’s first single, released on May 1, 1972. The lyric, “Well, I’m a standin’ on a corner in Winslow, Arizona” made the town still famous today. Well, if not famous, vaguely familiar in the recesses of our younger rock-n-roller minds!

END_OF_DOCUMENT_TOKEN_TO_BE_REPLACED

Driving For Walking For Our Lives

Last May, my publisher, Patricia Hamilton of Park Place Publications, and I drove 2,431 miles on a 20-day Northwest Book Tour. We mostly stayed  with friends and relatives while I presented at eleven book events, and came home with vivid memories and dozens of photos. 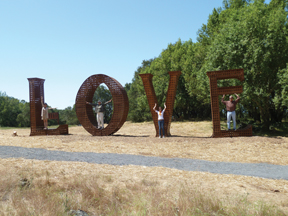 Now, almost exactly one year after the launch of Writing For Our Lives, I am releasing  a 74-page book filled with text and pictures about the book tour! It’s a bit like a scrapbook, but a little more high tech than a photo album with prints from a Brownie Box Camera. Patricia’s and my book, Driving for Walking for Our Lives,  details our preparation and scheduling, lists our itinerary, chronicles the events and includes statistics of expenses and income. END_OF_DOCUMENT_TOKEN_TO_BE_REPLACED

We all have stories to tell.... and remember we don't have to start at the beginning!

A few times every year, I help those interested in writing their own memoirs gain confidence and comfort with writing, and offer advice on memoir writing that I have gained from my own experience as an author.

Testimonials:
"What a wonderful day I had on Saturday attending your workshop. Not only did you make writing memoirs much easier than I would have imagined, but you held a space for creativity and it surrounded us, making writing our memoirs exciting and delightful. I’m on my way to writing my stories for my children."

"I was hoping the workshop could inspire and catalyze me to move from thinking about writing to actually doing it," One participant said. "Donna's advice to simply "tell our story" makes writing more accessible to me. I leave the workshop with eagerness and resolve to enjoy my ten minutes of daily writing."

"I have been inspired to write my story and about a few other interesting people in my life, too. I got some really good insights and enjoyed it!"